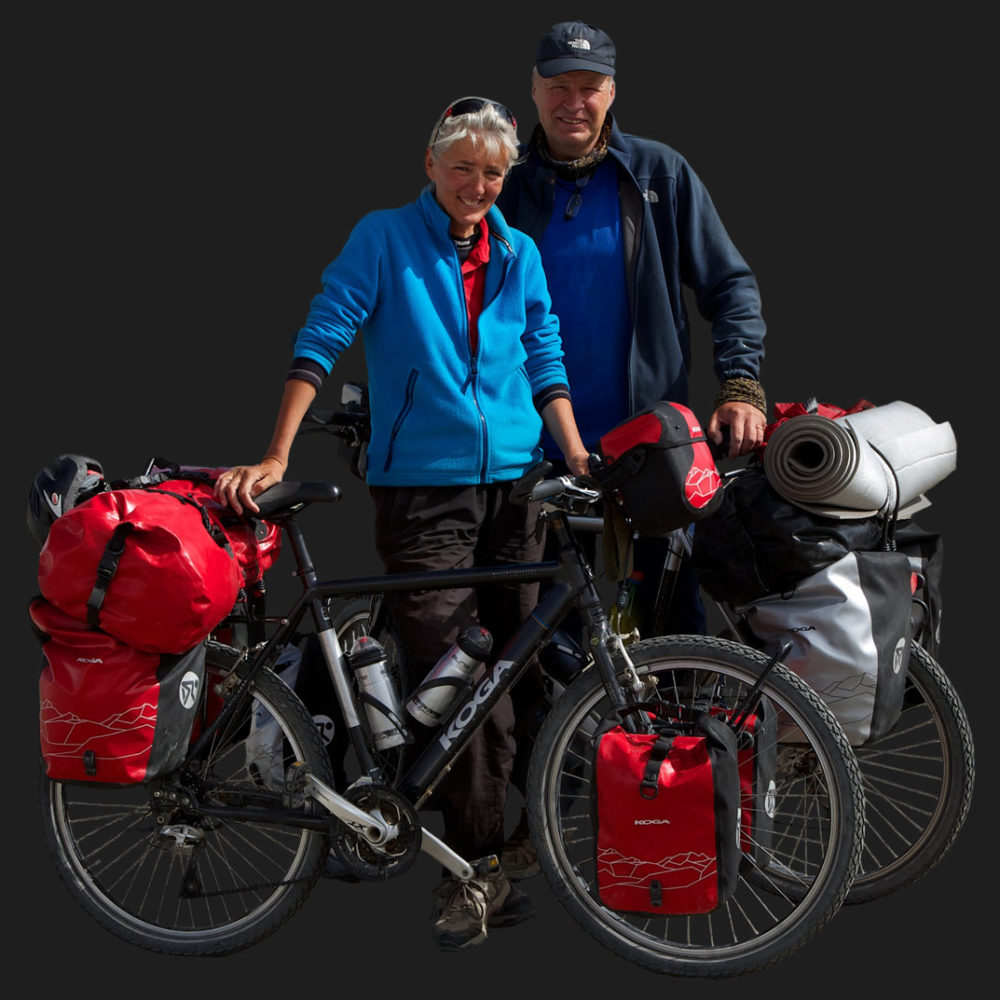 While growing up in the U.S.A., my girlfriend Wendy and I hatched plans to drive across the country after high school. But there was a slight problem, our map reading skills. As our parents pointed out, “You guys still get lost driving around Seattle, so how will you get there?”

Then I remembered reading about the Trans America trail. If we joined a Bikecentennial group tour, then there would be other members to help point us in the right direction. Plus my little brother had once gone on a bike trip. Being a smug older sister, I figured it couldn’t be that difficult.

After graduating in 1981, we set off. There were some ‘difficult’ times (rain + freezing temps + cotton clothing don’t combine well…) But we loved it, absolutely loved it! I also met Paul and 5 years later moved to the Netherlands.

In 2011 I began publishing Bicycle Traveler magazine. It’s my way of giving back to the bicycle touring community which has so enriched my life.

In Amsterdam, I grew up surrounded by two-wheelers. For me, bikes were just everyday objects that you used to go to the shops, school and even on vacation.

Later my friend Ronald Albronda lent me the book Wat heb ik nou aan m’n fiets hangen? wherein the author recounts his bike trip across America. After a few too many beers, Ronald and I declared; “If Wim can do it, we can do it!”

Besides being passionate about bicycle travel, I’m also a photographer and music composer.

Besides our annual 4 week tours, here are some of our more memorable adventures:

The tour started in Portland, Oregon and followed the Bikecentennial trail to Virginia.

I (Grace) was just 17 and had never toured by bike before – not even an overnighter. For me, the first couple of days were a shock. I still remember sitting despondently in a café with my friend Wendy, questioning if we were both up to physically completing the journey.

As for Paul, he was having a tough time in the mountains. He had never imagined that they could be so long and steep. His old racing bike just wasn’t up to the task. Plus, he had to communicate in a strange language day in – day out.

A couple of weeks into the trip we both re-vamped our two-wheelers and soon became addicted to the new lifestyle. That first ultimate experience of freedom. When Virginia came into view we thought, “This can’t be ending!” We felt ready to take on the world.

For my first tour through Europe, I convinced a couple of college friends to accompany me.

Armed with a paper map, no guide books, and zilch foreign language proficiency – we stumbled across the continent. As one of my friends said, “How can you get lost if you don’t know where you are?”

But that was also the charm. We had no pre-conceived notions of what France, Greece or even Italy would be like. It was one big adventure that opened our eyes as to how different people and cultures can be around the world.

Our first touch-down in Asia.

Landing in Bangkok, Paul and I were overwhelmed by the sights, sounds and humidity of Thailand. Everything was technicolour and we couldn’t understand a word!

Looking out over Bangkok, we wondered if it was even possible to pedal out of this hectic, overcrowded megcity. It was, but it wasn’t pleasant…

Once in the countryside, we relaxed and noticed that this trip was changing our view of bicycle travel. It’s not just about the physical challenge, it’s also about embracing new traditions and cultures.

Since we met on a bike tour, of course we’re going to honeymoon on one too!

A couple of days after the wedding, we flew to Bombay, India. It was our first visit to this enormous, exotic yet also chaotic country.

India challenged us in a completely new way. The crowds stared at us as if we were aliens. The hygiene level was horrible, yet the country was fascinating and never boring.

Then we headed on to pedal through Thailand, Nepal and finally ended up back in the U.S.A. What a contrast between bustling, overcrowded India and the silence of the desert in the American Southwest. Even after six months we thought, “This was way too short!”

On the road again through South-East Asia, India, Nepal and the U.S.A.

In 1991, India and Nepal had piqued our curiosity. Plus, the painted deserts of the American Southwest were so overwhelming, we just had to go back – but this time for longer. We wanted more depth, to be able to take in more of what we saw and what was happening around us.

And that’s what we got.

But it also felt as if we were on a carnival ride for 12 long months. Whenever things went wrong (which they often did) we would just repeat our motto; “adapt, adjust and improve!”

4 weeks of dirt road touring in the U.S.A.

The route was spectacular, beginning in the Colorado Rockies and ending in the red-rock deserts of Utah. For this trip – we splurged on new KOGA hybrid bikes that could take on the sandy backroads of the American Southwest. Previously we had stuck to paved roads, but with our new bikes we thought, “Why not go for it?”

The route was gorgeous and we loved having the road to ourselves. But there was also a downside. Carrying extra food wasn’t a problem, but the extra water weight was. In deep sand, we regularly came to a stillstand and while manoeuvring over rocky sections, we spent all our time just staring at our front wheels. It made us realize what types of routes we truly enjoy cycling, and sandy ones aren’t one of them…

After viewing pictures from previous trips, we thought, “The images of a a little red cyclist pedaling through those enormous landscapes is powerful. Why don’t we head back to the American Southwest and specifically photograph for that theme?” So off we went.

A half year spent pushing the pedals in South India.

Why go back? We had travelled there before, but now we wanted to change the nature of how we travel by bike.

After having undertaken so many trips – we realized that we missed the challenge of our first journeys. Touring had become too easy, we were too experienced. Our photograpy trip in the American Southwest in 2004 had given us a new direction – and we wanted to follow that further.

So, we decided to take on the challenge of a couple of new photography projects. The first one was to photographically visualize what it’s like to travel by bike. The other – to take pictures of local bicycle culture.

And our longest trip of all:

It was our longest tour ever – and what a journey! The feeling of timelessness  and freedom was mind boggling.

We pedaled through Asia, the Middle East, Africa and South America. Some of the highlights had to be crossing the Himalayas, riding the Pamir highway and immersing ourselves in the bicycle culture of Bangladesh.

Traveling for so long also changed us and brought us closer together. I always had my American standpoint and Paul his Dutch one. After spending so much time in all of the different cultures, our mentalities changed as we picked up some of the best aspects of each country we passed through.

Besides pedalling, we continued to combine our tour with a number of projects; photographing our touring bicycles for KOGA bikes, taking pictures of local bicycle culture, and launching Bicycle Traveler magazine. Plus Paul began  composing music while on the road. It was fantastic to be able to spend so much time  developing them further!

Our cycling trips have been enriched by combining them with projects:

A bike is just a bike. Or is it? Around the globe, bicycles have diverse faces and functions. Paul’s bicycle culture photography theme aims to capture these various facets. Visit his photography site for more information

Bicycle Traveler was launched in 2011. We aimed to create a magazine that showcases bicycle travel and delves into why people dream of undertaking round-the-world tours. Visit the BT website to download a free copy.

Both of us began on cheap, ill-fitting, second hand bicycles. We even took them on a yearlong tour through Asia and America.

Then in 1999, we finally splurged and became two proud owners of KOGA World Travellers. We’re glad that we took the trips we did on our old bikes, but boy are we happy with our new ones! They’re so much more comfortable, reliable and allow us to ride all types of terrain.

Since 2005 Paul also photographs for KOGA bikes. His images appear in their catalogues, website, store displays and other advertising materials.

Previously our attic was overflowing with boxes full of slides gathering dust. In a moment of inspiration / madness, Paul said, “Why not place them on internet?” In 2001 Impressions from Bicycle Travels was born.

Since then it’s morphed into a place to post our HDAV series, showcase inspiring images from other bicycle travelers and publish Paul’s music. The site is still a big timesuck, but we love it!

Major additions are posted to the What’s new page. 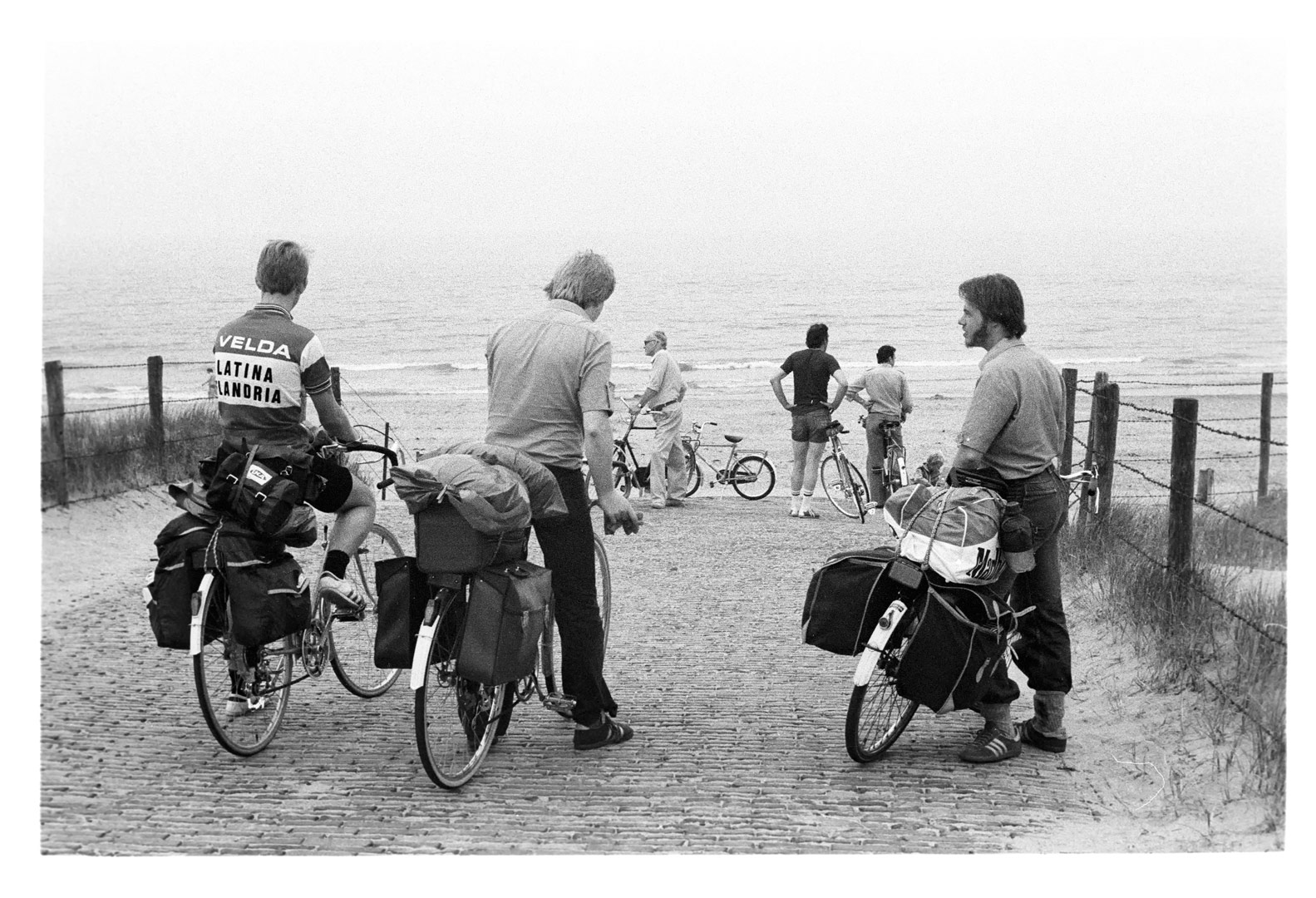