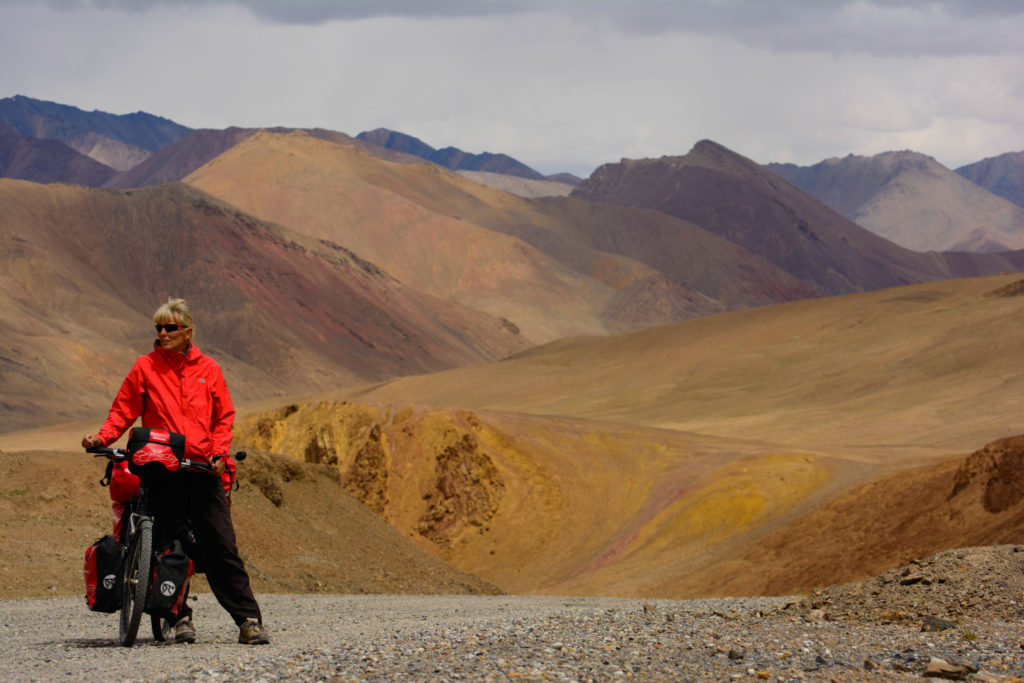 As Amaya Williams of  Worldbiking.info points out, “More and more women are exploring the world by bicycle. They’re riding up remote mountain passes, crossing continents on two wheels, and camping wild in the middle of nowhere.”

Why not join our ever-growing tribe? It’s a great way to see the world. So, we’ve put together a handy list of links, bicycle touring tips, safety info and resources for females to help you get started.

Advice on what to wear while cycling through conservative countries. And a small hint, it’s not short shorts or form fitting lycra…

For periods – goodbye bulky pads and tampons and hello Mooncups! The cup is a small, foldable, reusable device made from silicone. It collects the menstrual blood when inserted into the vagina. Quite a few long-distance female cyclists are big fans of them.

Some women even carry a peeing device in their panniers such as the WhizAway. It’s a small rubber funnel that fits against your crotch and allows you to pee while standing up or into a bottle.

Have questions about bicycle touring, gear or you just want some encouragement for your upcoming trip? Then check out the Bicycle Traveling Women facebook group. It’s also a great place to share your travel experiences.

Heike Pirngruber aka the Pushbike Girl has been cycling around the world since 2013. Her website contains numerous interviews with other experienced female solo cyclists. Plus an informative article on wild camping safety tips from other solo women.

Emily Chappell and a panel of women explorers answer the most common questions she receives on cycling as a lone female.

Olivia Round interviews a cross section of women cyclists, even one traveling with her baby.

In the BIG WOW E-Book from Loretta Henderson you will learn the tips and tricks of successful bicycle touring from over 100 accomplished women from around the world who travel solo by bicycle.

For all cyclists, including males, the biggest danger comes from motorized traffic.

But what about being hassled or attacked by men as a solitary female?

As Emily Chappell’s article On rape and racism points out:

…Shall I tell you of all the times I have been groped or flashed in my home country, in the course of my day-to-day life, in motorway service stations, in parks, in crowded bars, on public transport? (I think most women will have similar stories.)

For god’s sake, let’s stop painting our own society as a haven of peace and safety, which it most definitely isn’t, and by the same token, let’s stop turning the rest of the world into a no-go zone, full of dangerous criminals…

Emily’s right – there’s nowhere on earth where females are 100% safe.

Solo females often make a risk assessment on the countries they wish to ride through. Many countries are just as safe or safer than your home town. But there are a handful of countries that aren’t so.

How can you find out which countries have a dodgy reputation?

It’s easy, just e-mail a number of solo females who have previously pedalled through the country. You might skip contacting elderly women or females who travelled with a male partner since they probably won’t have experienced  any harassment. For example; Iran is often a favourite country of ‘couple’ cyclists – but not single females. And for a very good reason.

Visit a couple of bicycle touring facebook groups such as Bicycle Travelling Women and Bicycle touring and Bikepacking. In the group’s search field type the country’s name and the words  ‘sexual harassment’. Then read any results that might appear. Women will generally write about an incident directly after it happened since they seek sympathy and reassurance from like-minded people. If you do read of an incident – you can then contact the individual who wrote about it.

Asking for general safety advice in a Facebook Group or on forums may not give you an accurate picture of the safety situation for solo female bicycle travelers. That’s because many women don’t feel comfortable writing publicly about harassment or assault years after it happened. Others have kept silent in order not to be seen as sullying a country’s reputation.

Plus, asking a general question such as; “Is it safe to cycle in country X as a solo female?” attracts comments from women who have never pedalled through that country but are more than willing to write “Follow your dreams!” and advise you to go there.

Most countries are quite safe. By checking the facebook groups and e-mailing women who have been there before – it will help reassure yourself (and your mother!) that you aren’t doing anything foolhardy or dangerous.

An excerpt from Olivia Round’s interview with Alissa.

Q: When people expressed concern / fear for what you were doing, how did that affect you?

A: Sometimes I get defensive and feel determined to prove them wrong. I’m not actually a risk seeker; I’ve done my research and wouldn’t be doing these things if I thought the risk was unacceptably high, so it’s frustrating when people question my carefully-made decisions. I also get frustrated when people feel more concern and fear on behalf of women, which unfairly holds us back from so many great experiences, despite being well-meaning.

As Juliana Buhring writes in bikepacking advice for solo female cycling “Granted, the world is not as dangerous as many believe it to be, but there are some things the solitary female cyclist can do to increase the likelihood of coming home in one piece”.

For even more information:

Alissa from Exploring Wild – her safety tips for adventurous travellers.

World by bicycle – a subjective guide for women from Ewa Swiderska.

Julie Keller’s Final Thoughts & A Note on Being a “Single Woman” on the Road.

Safety tips for solo running which are also applicable for cyclists.

Loretta Henderson’s WOW wall is a community of more than 200 pioneering women (mainly soloists) who have cycled in almost every country around the globe.

Women Cycle the World is a collection of blogs and resources showcasing women who ride bikes in the remotest corners of our planet. Whether they cycle solo or with a partner, you’ll find scores of female bicycle travelers featured here.