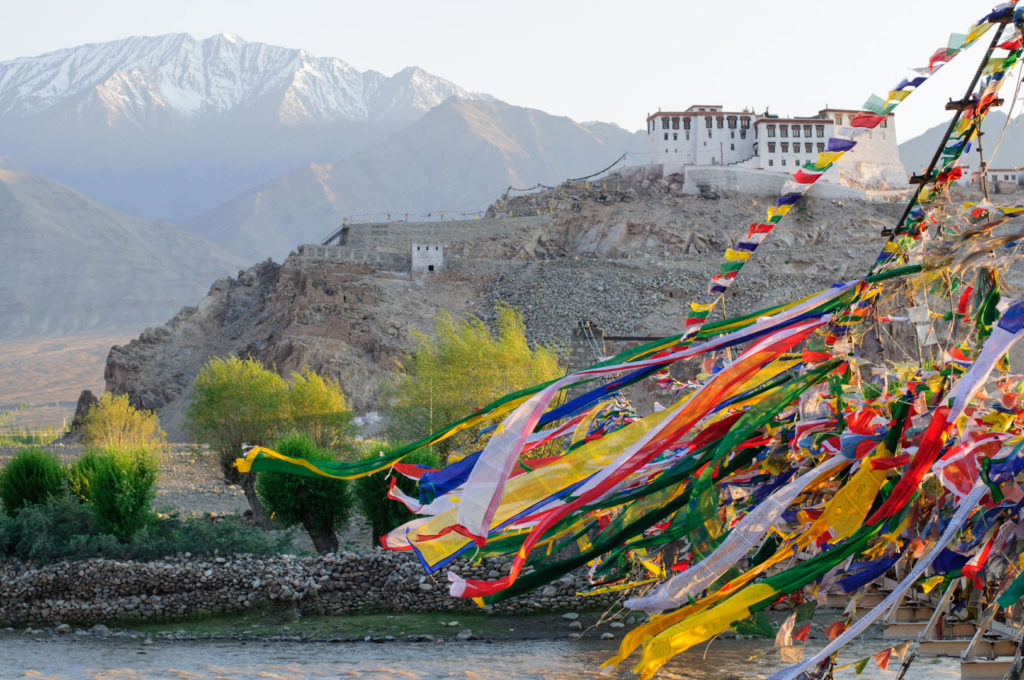 Himalayas-map
Nako
Skardu
Manali
Kaza
Leh
Keylong
Pang
Rumtse
Rampur
Reckong Peo
A view over old Leh. The bazaar is full of souvenir shops and tandoori pizza restaurants. Any extra calories consumed will be burned off in the upcoming ride.
Shey Palace can be seen in the distance.
The Tsemo Gompa sits high on a craggy outcrop above Leh.
Thiksey is one of the largest monasteries in Ladakh. It’s also a great place to experience Buddhist culture and spend time acclimatizing.
Looking out over the lush Leh valley. It’s the last greenery you’ll see until after the Baralachala pass.
We camped with this view of Stakna Monastery, and spent the evening watching the prayer flags flutter in the wind.
A monk gave us a tour of Hemis Monastery. It contains a fascinating collection of ancient Tibetan manuscripts and relics, well worth a visit!
Rumtse is the last permanent settlement before the Taglangla Pass. Most southbound cyclists spend an extra day acclimatizing here. And those that don’t, often end up turning back before the summit.
Looking back on some of Taglangla’s switchbacks.
The summit of Taglangla. At more than 5,000m, it’s not a place to stick around…
Debring sits at the bottom of the pass. It might not look like much, but it was fantastic to be able to stuff our face with food after summiting.
The More plains. With its strong winds its heaven for northbound cyclists and a nightmare for the rest.
Heading down to the tent camp of Pang. Hot tea and chapattis await.
Beginning the ascent of the Lachulungla pass.
The cold, wind-swept summit of Lachulungla.
Flying down the Gata loops.
Tsarap River
Looking back at the Baralachala Pass.
Nearing the summit of the Baralachala.
For southbound cyclists, a glorious 1,700m descent lies ahead!
Greenery starts to appear.
Cruising down to Pateo.
Keylong and the first hot shower since Leh.
Heading into the desolate Chandra River Valley.
One of the many road washouts / stream crossings on the route.
Camping at the base of Kunzumla Pass with a fantastic view from the tent.
Gasping for breath on the Kunzumla Pass.
A stupa on the summit of Kunzumla Pass.
Beginning the descent into Spiti Valley.
Key Monastery sits picturesque on a hilltop.
Kaza is the headquarters of Spiti Valley and a place to pick up your inner-line permit. It also has a bakery that serves up fresh cinnamon rolls!
Dhankar Monastery
A statue in Tabo Monastery.
Nako town. It’s a relief to arrive here since you either have to go over the Malling slide or ascend numerous switchbacks up from the river.
Descending into the Baspa river gorge. This section of road is not a place you’d want to be caught on as evening approaches…
The road was blasted out of the cliff face.
The town of Reckong Peo lies just above the main road. Eager northbound cyclists (they’re still full of energy!) often climb up the ridge to visit the Chandika Devi Temple.
Water cascades over the road on the other side of the valley.
The Padam palace in Rampur. For northbound cyclists, Rampur is also a place to pick up your inner-line permit.

The highway passes through a variety of landscapes; from the high deserts of Ladakh all the way to Rampur’s lush green valleys.

Mouse over the red dots to view the images behind.