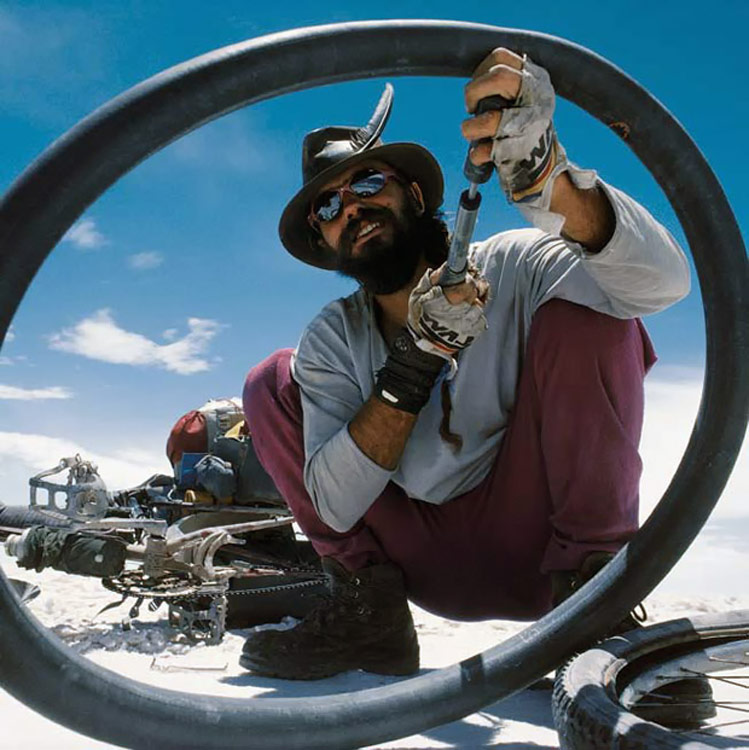 When he’s not exploring the world by bike, Claude lives in Geneva, where he was born in 1960. After multi-year cycling trips through Europe and the Himalayas, Claude left Switzerland in 1994 for a two year trip to Japan. His bicycle, dubbed the “yak” has a passion for detours and the bike decided otherwise. Singing with every turn of its wheels, the “yak” traveled through Europe, Asia, the Americas and Africa before finally coming back to Geneva. This trip lasted 7 years.

On his return June 16, 2001, his passion turned into his profession. He presented a slide show and published two books.

One of many e-mails that he sent to friends during that trip:

One traveller, one travel, one single story. Millions of travellers, millions of stories. There is no road, the road is made by pedalling. In Villarica, I met Jamie, an American cyclist who started one month ago his journey in Temuco, central Chile. At 25, he met his real mother for the first time in his life – for only four hours. Enough to give him wings and finally two wheels in Patagonia towards what locals call – for geographical and commercial reasons- “the end of the world”. The destiny sealed us to ride to Ushuaia. Jamie intends, after four months riding in the southern cone to cross his own country from East to West towards “the beginning of the world”: his mother. A voyage into the heart.

Of course, Claude continues cycling and in 2005 he left Geneva with Nathalie Pellegrinelli for an extended tour. Claude writes, “Between the tour of my neighborhood and traveling the world, there is always the spirit of discovery.”